Message from the Chair

Seasons Greetings!! As we wind down the year, I want to share with you my hopes for 2018. While we continue to struggle with assaults on the middle class, science, justice, and it seems all things we once considered reasonable; we have made amazing strides as Democrats in the last year. Nationally and locally – the Resistance has been winning.

For those of you newly engaged in the political struggle, I hope this last year hasn’t been filled with too many obstacles. To those of you who have long been a part of the Benton County Democrats, we are grateful to you for your support and guidance. We are becoming more cohesive and the spirit of camaraderie was particularly on display at our recent Rise & Organize seminar which was overflowing with Democrats of all stripes ready to turn the 4th CD blue in the coming year.

It is my fervent belief that this unity is a sign of things to come. In the new year there is much work to be done and, as we continue to welcome more activists and resistors, I have faith that we will achieve our goals. I hope that everyone reading this has found their place within this grass roots resistance. I would like to thank Indivisible, Love Not Hate, Post Card Sundays, and the Huddles for working with us towards economic, environmental and social justice. We are quite the patchwork of folks and, our efforts no matter how small, have created a momentum in our community and for that I’m truly grateful.

As your chair, I remain committed to the training of Precinct Committee Officers as well as recruiting and training volunteers for our Get Out the Vote efforts. 2018 promises to be a year of organized resistance and I for one feel fortunate to be a part of such a history making endeavor. Congratulations to our recommended candidates who won their local elections and thank you to all those who ran and fought hard to represent us. I wish you and your families Happy Holidays and a Happy New Year.

Christine Brown Interview
Last month Christine Brown, the currently declared candidate to challenge Dan Newhouse in WA-04, sat down for a question and answer session with this newsletter. Here are some key points she wants Democrats in Benton County to know about her campaign, her stances on the
issues, and her background. Note: The interview has been compressed and paraphrased for brevity.

Q: Why did you decide to run?
A: During my thirty years as a journalist I was careful not to let my political views color the news I was reporting on. During that time I interacted with countless people and got to know their stories, but I could never tell my own, about how I got my start, what got me interested in politics, and now, I feel compelled to run.
I started my career in human services in Yakima. There I worked with outstanding elected officials and saw firsthand their efforts to make a difference. I couldn’t follow right away due to career and family (twins are murder on life plans) but I never lost the desire to one day do my part. My long television career allowed me to gain the name recognition that’s so important in running for office. When Donald Trump was elected, and I saw the damage he was doing to our values, America’s standing in the world, and the very foundations of our Republic, I knew it was time for me to step up.

Q: What defines your campaign?
A: First off, I’m not owned by big donors. Dan Newhouse can count on huge amounts of funding from outside the district, or even the state, from conservative mega-donors. My campaign relies on small donations from individuals. Also, I’m not confining myself to just the big counties in the district. I’ve been traveling throughout WA-04 for about the last six months — it’s been a full-time job. Sure, I’ve spoken with people in the Tri-Cities and Yakima, but I’ve also met with people Othello, Omack, Twisp, Moses Lake, anywhere I can connect with people. Every vote counts and people in small towns need to understand they aren’t on an island.

Q: What are some big issues that you want to tackle:

Q: What is the one thing you want people to take away from this interview more than anything else?
A: I can’t do this alone. I have to have a lot of help. I’ve been traveling almost full time and I’m willing to work, but I’m up against a machine. The moment the national Republican establishment realizes I’m a threat, hundreds of thousands of dollars will flood in to support Dan Newhouse. He said recently he’d spend over a million dollars on the 2018 election. I can’t expect the working families of the district to pump big money into my campaign, so I’m just going to have to spend smarter and work harder. On the other hand people are coming out of the woodwork and offering to help, and I’m really very grateful and encouraged by that. We can do this by pulling together. People interested in helping can visit my  website, christinebrowncongress.com/ to see how to help.

Last month the citizens of Pasco voted on a bond to build new school facilities. The need was clear with many students studying in crowded and crumbling temporary buildings, but with a 60% threshold required to pass the bond getting it done was no sure thing.

Now, with the final vote count certified, the bond issue passed by a total of seven votes. Remember this the next time you’re tempted to give in to cynicism; if eight voters had tossed their ballots because they thought their votes didn’t count thousands of children would still be stuck trying to learn in poor facilities for years to come.

Regardless of the outcome, it’s important that your voice be heard. Even if you know that your candidate is going to win (or lose), your vote changes the margin of victory (or loss) and impacts the influence that the eventual officeholder wields during their term. Their mandate is determined by the margin of victory.

Politics isn’t fast, easy, or pretty but you can and do make a difference. As we fight to take our country back, to preserve the values that made America a beacon of hope and progress to the world, remember that your contribution is key. No matter how good or bad things seem to be going never stop voting, donating, and volunteering!

Benton and Franklin County Democrats hosted a “Rise and Organize” training event provided by the State Party at the Franklin PUD on Sunday, December 17 from 1 to 5 pm. Over 50 volunteers were in attendance for presentations by State Coordinator Dylan Cate and Central Washington Organizer Maria Beltran. Participants attended from Yakima, Grandview and other outlying areas. Participants learned and practiced the core organizing skills that will be needed to get Democrats elected. The training covered:

BCDCC will be hosting the second Organizing Academy Feb 24th 1-5pm at the Plumbers and Pipefitters hall in Pasco.

Will Dan Newhouse Come Through on DACA?
By Richard Badalamente

The Deferred Action for Childhood Arrivals program (DACA), instituted by former President Barack Obama in a 2012 Executive Order (EO), protects people brought to the United States illegally as children from being immediately deported if they are picked up by immigration officials. It is estimated that there are some 19,000 Washingtonians impacted by this order. 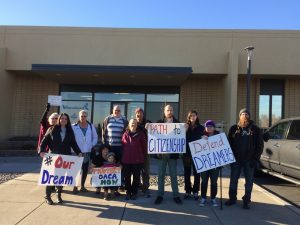 Now that President Trump is rescinding the DACA EO in March 2018, and Rep. Newhouse is up for re-election in 2018, Newhouse is making a show of calling for legislation to “find a solution” to the issue, going so far as to publish an open letter to the Speaker of the House, Paul Ryan, calling for action.

On December 5th, some 20 concerned citizens demonstrated in front of Rep. Newhouse’s Richland office, and then met inside with Newhouse’s Deputy District Director, Josh Lozano, to ask that Newhouse move urgently to address the problem, including asking that Newhouse pledge to vote against a spending bill that doesn’t include the DREAM Act. Advocates argued that a path to citizenship is a moral imperative, and that doing so will make our community stronger. Mr. Lozano, of course, could offer no promises.

That same day, Rep. Newhouse made a show of standing with 33 other House Republicans to show support for addressing DACA. “The urgency … is real and this is something that should be solved before the end of the year,” Newhouse stated (The Hill, Dec 5). Rep. Joaquin Castro (D-TX) said the best chance to pass immigration legislation is this year, amid the urgency of must-pass spending bills. “Once the Congress gets beyond that, it will become harder to leverage support for DACA into successful legislation” (Houston Chronicle, Dec 17). House leadership doesn’t agree that the issue is urgent. They feel they can wait until early March to address it (The Hill, Dec 5).

So legislation that affects tens of thousands of our friends and neighbors, and some 800,000 DACA recipients nation wide remains in limbo. Will Dan Newhouse come through for these people? It appears he missed his best chance. Still, we must keep the pressure on. Newhouse needs to know he’ll be held accountable in 2018 if he doesn’t get this done, or make a damned good try to do so.

What has Dan Newhouse (R-WA4) done for me lately?
By Richard Badalamente

This is a recurring column in the newsletter. In it we’ll introduce examples of legislation sponsored/co-sponsored, or otherwise supported by Mr. Newhouse that might make one question just who our representative thinks he’s representing.

Internet Privacy Rules
On 105th Anniversary of the day that Captain Robert Scott, freezing to death in a tent near the South Pole, made the last entry in his diary saying, “the end cannot be far,” Dan Newhouse voted to end Internet privacy rules. He claimed the rules were unfair. One imagines Dan’s campaign contributors, including AT&T, Comcast, Verizon, and T-Mobile, appreciated Dan’s decisive action. The rest of us? Not so much.
According to critics, “eliminating these rules will allow ISPs to sell or share sensitive customer information on computers and cellphones, including internet browsing history, Social Security numbers, email contents, health and financial data, and even data about users’ children” (Tri-City Herald, 3/31/17).

How about those cute cat videos? Surely, they’re safe from prying eyes. Be sure to let Dan know how much you appreciate his “fairness.”

Puget Sound Energy (PSE) has proposed an 18-story liquified natural gas facility (LNG) at the Port of Tacoma for the purpose of producing, storing and distributing liquefied natural gas. The Environment and Climate Caucus is proposing a resolution in opposition to the Tacoma Liquified Natural Gas Facility. The resolution text is available here: https://drive.google.com/file/d/1-Ytww2GoJAIhjpcexikkHHl_tycEtDRf/view
The caucus is asking for support for the resolution from the Legislative Districts in hopes of getting the resolution passed at the state level. The vote will happen at the next WSDCC in late January.

We had a very special Holiday Party this year with a visit from Santa, as well as our State Chair, Tina Podlodowski.
Tina awarded our very own Steve Lee, Kate Moran, and Blanche Barajas with Warren G. Magnuson Awards, also
known as “Maggie’s”. Maggie awards recognize outstanding Democratic activists, candidates and community leaders. We are very proud of our Maggie award recipients.